Roar of the Rings Anthem Experience

Posted on December 25, 2017 by Melanie Anderson

A few weeks ago I sang the Canadian National Anthem for the Roar of the Rings Olympic Curling Trials at the Canadian Tire Center in Ottawa. Lots of people have asked about the experience, so I figured it was time to write about it – read on for a video and the story!

So how’d this come about? I heard about it from my friend Kerrie, who emailed me to ask if I was interested. I said yes and a few weeks later, the event organizer emailed me with details, and I picked a day to sing, which was the weekend since I have the whole day job thing going on during the week. That was pretty much it!

I admit I didn’t really know much about this tournament other than it was curling and playoffs to represent Canada at the Olympics. I’m a bad Canadian – I don’t really follow curling or hockey. 🤓However, when I did my research about Roar of the Rings, I realized just how big of an event this was. It was televised on TSN, and there were about 10000 people at the semi final games – the biggest crowd I’ve ever sung for! I thought back to my childhood when I proudly watched my Dad make the curling ice for the Tournament of Hearts. Small world. 🌎

Before singing at the women’s semi final in the afternoon, I met the organizer, dropped my stuff, went into the bowels of the Canadian Tire Center with her and as we popped out onto the ice, she was notified that the opening would take place from the other end. So, off we ran to get there in time, high heeled boots and all. We made it to the opposite end of the stadium and I had time to catch my breath, meet the MCs of the event, the TSN guys, and the security guard. As the players finished up their warm up, I was told where to stand and given my microphone.

I’ve sung the national anthem probably about 5000 times in my life, maybe more. But as I got down to the area to sing, I started thinking ‘omg.. What are the words? Does my French sound legit? Is the anthem being televised on TSN? Do I look ok? Whoa!’ It’s amazing the things that go through your head right before you sing. 🙂 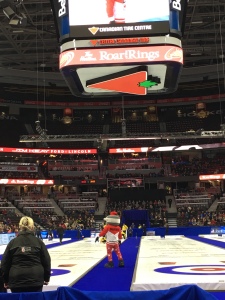 As I sang the first anthem, I looked up and thought ‘wow’. That was a big crowd. People were singing along, which was comforting, but then I realized I was following the crowd at one point and snapped back to ‘Oh yeah, I’m leading this!’. Lol, you never want the anthem to get too slow. 😊 It was fun. Afterwards, I shook – I always have delayed nerves. Then I got my stuff and went up to watch the game with my boyfriend. Super fun times!

After the first game was over, we grabbed some food and I had a quick power nap – so much excitement, I was really tired! After a burger and a tea, I was ready to sing for the men’s semi final, round 2! This experience was even more fun as I knew exactly what to expect.

While I waited to go on for the second game I talked to the security guard about vocal technique; turns out he was a singer in a rock band. We had some good laughs and I gave him a few tips. When it was time to sing, I really didn’t have any nerves and I just enjoyed the experience for what it was. My mom and Dad said they saw me on tv as the players paraded out, but the anthem wasn’t televised. Fortunately my boyfriend caught the whole thing on video (thanks Kelly!!) and is now on my website: National Anthem at Roar of the Rings.

In summary, it was a surreal day, and a ton of fun. I’m grateful to have had the experience and hope to be able to do it again someday!

Thank you to everyone who viewed the video on Facebook and shared it with your friends – it means a lot! I always appreciate your kind words and support! ❤

To those celebrating today, Merry Christmas!! Wishing you a day filled with love, light, joy, and all of the deliciousness!! 🎄🎁

Hugs and until next time,

1 Response to Roar of the Rings Anthem Experience